Today
Increasing clouds, with a high near 37. Southwest wind 3 to 6 mph.
Tonight
Mostly cloudy, with a low around 24. South southeast wind around 5 mph becoming calm.
Thursday
Cloudy through mid morning, then gradual clearing, with a high near 49. North wind 5 to 9 mph.
Weather forecast provided by weather.gov.
Sign In LinkSearch

Your session will expire in 0 minutes. 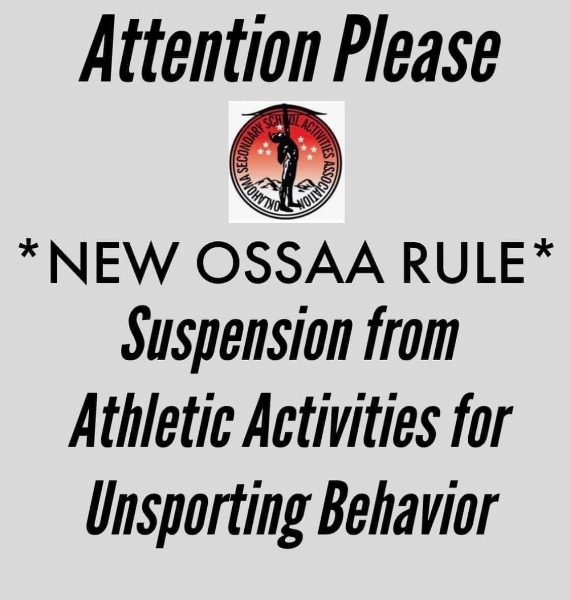 The rule states; Any “egregious” unsportsmanlike behavior by Coaches, Players, or Fans two or more times in the same season / same sport will cause the SUSPENSION of the Team and/or Individual from the rest of the season. This includes being ineligible to participate in the playoffs.

The OSSAA cited some the following examples of “egregious” unsportsmanlike behavior:

- Players getting into fights with other players while shaking hands at the end of contests.

This includes fans getting ejected/removed from the event. Therefore, any combination of two egregious occasions would cause the school/team to suspend the remainder of the season, including playoffs.

There is an extreme shortage of game officials (referees and umpires) for all junior high and high school level sports. Please DO NOT comment anything negative to officials. Comments to officials WILL NOT change the call that was made. If you would like to help with the official shortage, by becoming an official, please see the OSSAA.com site under the “OFFICIALS” tab.

Please help in this matter and play a positive role during sporting events!